← Robin Williams’s Death, Depression, and Reuniting with Christopher Reeve
In the Moment ~ Poetry → 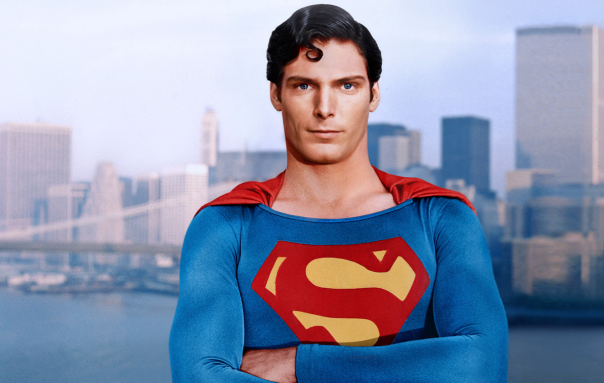 When your hero dies in life, whether it’s someone in your family, a friend or a famous individual, it’s always difficult to bear. And perhaps that’s why we seek solace in our own thoughts; we try to find peace when all we see is grief. At times, the world bleeds colour and all that’s left is a dark, frustrating grey hue. It covers your eyes and blinds you temporarily. Death finds a way to eat into our souls, no matter how much we try to smile and move on.

Christopher Reeve would have turned 63 on September 25, 2015 – today – if he were still alive. Almost 11 years on since he died, his death still weighs heavily on my mind. I still remember where I was, what I was doing and, even, what I was wearing the day he died. Travelling to my youth theatre group as part of an early morning Sunday rehearsal, I was sat in the car with my dad. When I heard of his death on the radio, I stared at my black converse and jeans.

In that moment, my mind was elsewhere. Tears dropped from my cheek and splashed onto my jeans; I wasn’t even aware I was crying. In fact, my immediate thought remembered his final wishes, the one where he decided that he’d manage to walk again. Somehow he’d summoned up the courage and walked straight into death.

Though Christopher Reeve died that day, Superman didn’t. A superhero in the movies, he was also seen as a hero in life, particularly for his work in paralysis. Setting up the Christopher and Dana Reeve charity was just a part of those plans to bring those with paralysis a better life. One in which they would be able to walk again.

Today, that same charity is asking his fans for a donation of $63 in honour of Christopher’s 63rd birthday. And I’ve just donated $63 – or the British equivalent of £41.50. 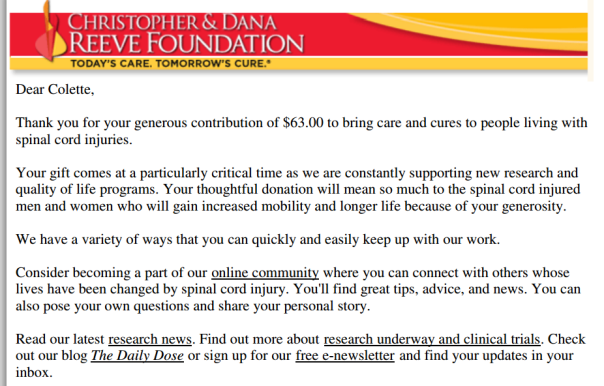 The Christopher and Dana Reeve Foundation is a fabulous charity, not only for the work that it continues to do on a daily basis for those with spinal-cord injuries or other types of paralysis, but for upholding the spirit of Superman for so many years and never giving up hope.

Having suffered a very serious back injury when I was 15, and again when I was 16, there were moments when I couldn’t feel my legs. I spent 40 minutes on a set of steel stairs and in the back of an ambulance believing I was paralysed from the hips down. At that age, it was the most terrifying thing in my life. When the feeling did come back into my legs, I remember feeling relieved and then entirely ashamed at myself. I knew people had suffered far worse and never lost hope for a second. In those 40 minutes, my hope was shattered completely.

Now I spend my life actually living. I am thankful every day that I can use my legs. Earlier this year, my friends and I ran the 5k Race for Life in aid of Cancer Research UK – another fantastic charity – and we raised near enough or over £200 for the cause.

Happy 63rd Birthday, Christopher Reeve. And thank you for giving me hope.

← Robin Williams’s Death, Depression, and Reuniting with Christopher Reeve
In the Moment ~ Poetry →